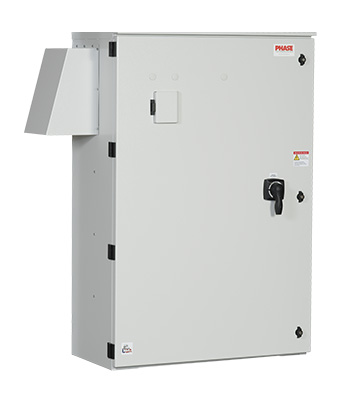 DX Signature Series VFD’s are designed with film bus technology to ensure little to no downtime when commissioning the system at the beginning of each season. By utilizing the latest advances in power electronics and capacitor technology, Phase Technologies VFD’s are the best choice for motor control applications.

An input reactor is a standard feature on all DX Series VFD’s. The input reactor is an inductor connected in series between the input terminals and the diode or IGBT rectifier. The input reactor reduces harmonics on the input lines, protects the input stage from current surges, and reduces ripple on the DC bus. It does offer some protection against voltage transients, but the installation of a surge protective device (SPD) is recommended to protect the system from surges.

The drive and enclosure are thermally engineered as one unit, directing airflow over critical heat-producing components while isolating sensitive components from outside ambient air. Most outdoor 3R rated drives integrate a NEMA 1 indoor VFD in an outdoor enclosure without segregating the airflow. The drive and other sensitive components can be degraded due to re-circulated hot air and contaminants from the outside air.